George loves skiing. He is from Boise, Idaho where he grew up skiing and competing in freestyle at his local ski hill, Bogus Basin. After high school he moved to Utah to pursue a college degree and continue his focus on competitive skiing. He earned a spot on the U.S. Ski Team competing internationally for three years while completing his degree in natural resources and recreation planning at the University of Utah. George then moved to Alaska to work for the Forest Service for a summer season and has never left. He now makes his home in Girdwood working with the Forest Service in the summers and as a heliski guide with Chugach Powder Guides in the winter. In the spring he travels to Iceland to continue his ski season, guiding both heliskiing and ski touring. In the summers you will find George traveling around Alaska in his funky RV exploring the outdoors, meeting new people, and enjoying late nights under the midnight sun. 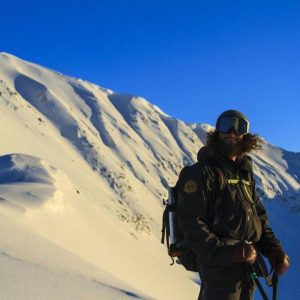